The memory of the New Martyr George “who was martyred in Ioannina” is honored every year with the appropriate dignity in his birthplace Aghios Georgios, Grevena (previously Tsourchli). A village which changed its name in honor of the saint in 1927.

On the 17th of January, a day our Church honors with the feast of St. Anthony, was also the day that the New Martyr George, at the age of 30 in 1838 came to a martyr’s death by hanging in the city of Ioannina. The gallows were set up in the busy Ioannina square of “Kormanio”, which is opposite the great Castle entrance. The square now bears the New Martyr’s name. 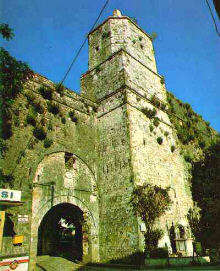 The New Martyr, George, was one of the last victims of the forced recruitment of Christian boys by the Ottomans. This happened when he was 12 years old. Nevertheless, he was able to preserve his Christian faith untainted; a faith for which he was martyred despite the Turkish environs of Ioannina considered him to be a Turk and employed him in the Turkish army as a horse groom, with the name “Infidel (Giaour) Hasan”.

The New Martyr, George, who was modest in his ways, always war the traditional long foustanela of his village and an embroidered waistcoat, which he is depicted in, in icons.

A new phase in his life started in October 1836, when he decided to get engaged and then marry on the feast of St. Demetrios, a Christian girl from Ioannina, Eleni. They had a son together, born in December 1837, who was baptized in keeping with Christian tradition on the 7th January 1838, giving him the name John.

All this, of course, provoked his persecution and eventually his death by martyrdom. This was because, despite Turks’ torture, to make him deny his Christian faith, the saint confessed with courage “I was never a Turk, I was always a Christian. He even said this at the gallows, which he faced with composure and bravery.

His last words are typical. When his Turkish tormentors asked him “What are you?” before pulling up the gallows, George asked that his hands be untied, he made the sign of the cross and said, “I am a Christian and I shall die a Christian, I bow before my Christ and my Lady Theotokos.” Then, turning to the Christians who stood there he said, “Forgive me brethren, and God will forgive you.”

The body of the Saint hung on the gallows for three days, without, however, decaying, an incident that made even the Turks believe in his holiness and allowed him to be buried with the greatest honor.

George, the New Martyr, was officially recognized as a saint on the 19th September 1839 by the Holy Synod of the Patriarchate of Constantinople under Patriarch Gregorios and eleven synodical bishops. However, he had already been accepted as a saint by the Christians of the area from the time of his death. Not only that, but according to some witnesses many Muslims who lived in the area of Ioannina also recognized his holiness.

Many biographies and services were written for the New Martyr, George, amongst them the one by the monk Gerasimos Mikrogiannitis, which mentions amongst other things:

“This distinguished New Martyr of Christ, George, who was the son of devout and virtuous parents, Constantine and Vasilo, from a certain village of the province of Grevena, commonly called “Tsourchli” now called “St. George”. His father, a poor man, obtaining life’s necessities by farming, who had George and brought him up in piety, could not educate him because of poverty. With no experience of formal learning, nevertheless, being orphaned of his parents at a young age he lived with his brothers for a time. In these circumstances, moved to Ioannina, where he earned his living as an waged worker, with simple manners, modest decency, gentle and kind, and not absent from marveling at the house of the Lord in his season.”

The first icon of the Saint was made on the 30 January 1838, only a few days after his Martyrdom, commissioned by the Hieromonk Chrysanthos Lainos, who is mentioned as his spiritual father and guide. In this icon the saint is depicted in his traditional clothes, holding a cross in his right hand and in his left a palm branch and a scroll with the petition: “Do not separate me from the glory of your martyrs, my sweetest Jesus, because I am consumed by your love, but also strengthened by your great mercy, O Christ.”